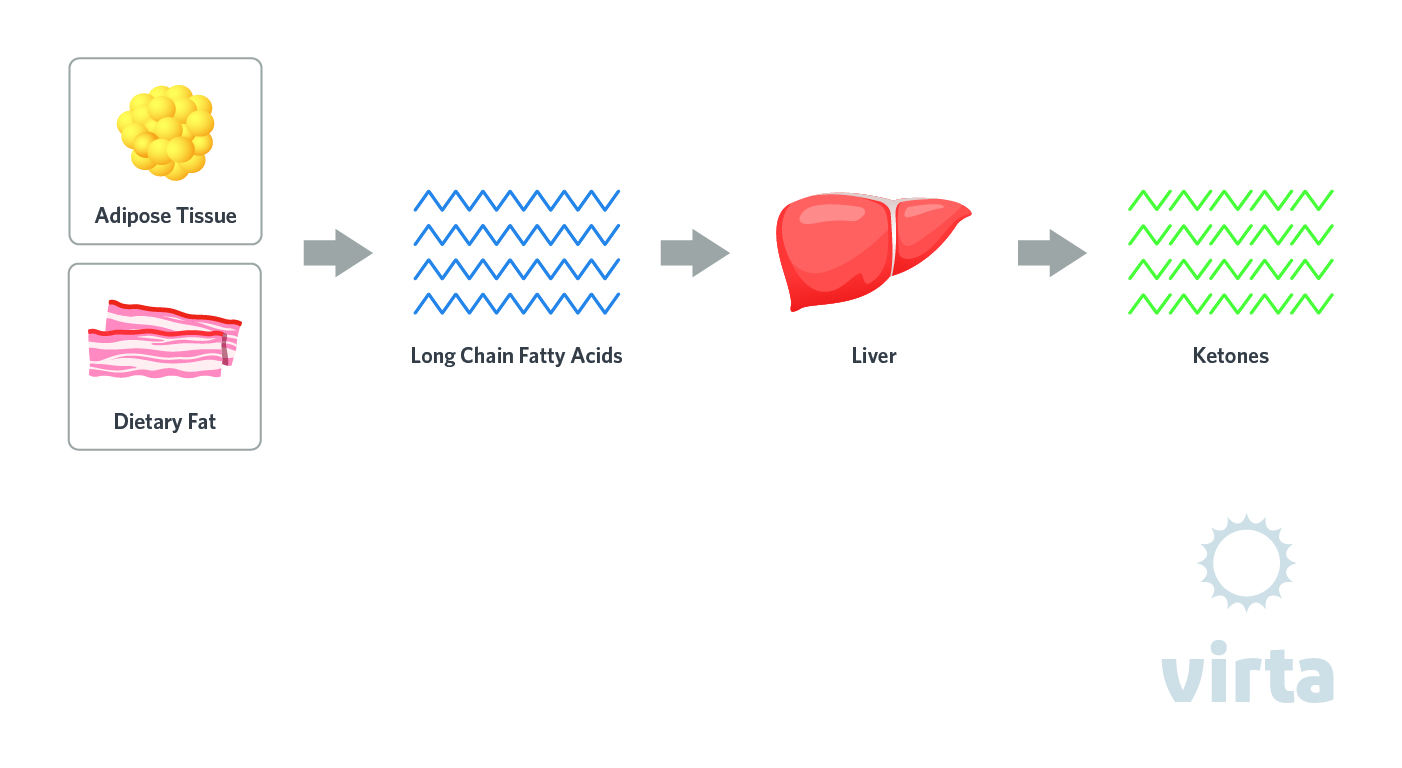 Circa mid-19th century, ketones were discovered in the urine of patients with uncontrolled diabetes. This led to the negative connotation of ketones being indicative of metabolic dysfunction, a sentiment that persisted for the next 150 years. Despite pioneering work published more than 4 decades ago showing that ketones were highly functional metabolites, these fat-derived molecules are still considered by many doctors, dietitians, and nutritionists as toxic byproducts of fat metabolism. Adding to this, the concurrent misunderstanding and vilification of dietary fat, from which ketones are derived, has further perpetuated this negative perspective around ketones and nutritional ketosis.

But now the nutrition-metabolic landscape is changing dramatically. New research in the last 15 years has led to increased public support for dietary fat and ketogenic diets, owing in part to accumulation of a critical mass of scientific evidence that links ketones to a broad-spectrum of health benefits.1 Now scientists, healthcare professionals, and an inquisitive public are eagerly seeking to understand and translate this widely misunderstood area of science. A Pub Med search of papers using the term ‘ketogenic diet’ between 1980 to 2000 retrieves 215 results, compared to over 2000 citations from 2001 to present. Google Trends indicates that searches for the word ‘ketones’ skyrocketed in 2012 and continues to climb.

Even to the present, the objective information on the science of ketones has been absent from most academic nutrition or medical curricula, resulting in an abundance of misinformation. To help the reader overcome this, we will strive to explain key terms and concepts related to ketones to give you a solid foundation with which to distinguish fact from fallacy.

When we say ketones, we are referring to the primary circulating fatty acid metabolites beta-hydroxybutyrate (βOHB) and acetoacetate (AcAc).

Quick side note: the fad compounds called ‘raspberry ketones’ are a completely different topic. They are a different class of molecules with no basis in published human research for any of the popular health claims, and thus not relevant to this presentation.

Hepatic (liver) production of these 4-carbon molecules increases when insulin levels are low and glucagon is high enough to result in accelerated lipolysis (release of fatty acids from adipose tissue triglycerides) and their transport via the bloodstream to the liver. Ketones are synthesized from the controlled cleavage of fatty acids in the liver, a process called ‘ketogenesis.' Release of fatty acid-derived ketones into the circulation results in a metabolic state of ‘ketosis.'

The liver produces ketones all the time, but the rate of ketogenesis and magnitude of ketosis depends primarily on dietary carbohydrate and protein intake. If you consume enough carbohydrate and protein to elevate the hormone insulin to levels that inhibit fat breakdown (and make glucose the predominant fuel), then ketogenesis operates at idle, translating into blood ketone concentrations about 0.1 mmol/L. Most people following official dietary guidelines that emphasize carb-rich foods, be it ‘low fat’ or ‘Mediterranean,' rarely experience ketones higher than 0.3 mmol/L. Nevertheless, the ketogenic process is always idling in the background, so they are always present in the circulation. At these low levels however, ketones don’t have much of a role in providing fuel nor do they exert signaling effects.

A ketogenic diet that is restricted in carbs and moderate in protein results in increased production of ketones into a range we call nutritional ketosis (described below). The amount of carbohydrate and protein a person can consume while still promoting nutritional ketosis varies based on many factors, notably the degree of that individual’s underlying insulin resistance. A general range is 30 to 60 grams per day of carbohydrate (closer to 30 grams for those who are more insulin resistant) and somewhere between 1.2 to 2 grams protein per kilogram reference weight per day. There are many ways to formulate a highly palatable ketogenic diet using real foods. But for it to be safe, pleasurable, effective, and sustainable requires consideration of several important principles that extend beyond simply restricting carbohydrate. A well formulated ketogenic diet (WFKD) adequately addresses all these components. The basis of a WFKD is described in our ‘Art and Science’ books.2,3

A well-formulated ketogenic diet results in decreased insulin levels and limited glucose availability, which triggers the ketogenic pathway to go from idle to half throttle. This happens over the course of a couple days. This increase in blood ketones represents a perfectly natural, if not preferred, state of ‘nutritional ketosis.' This is characterized by concentrations between 0.5 and 2 mmol/L for most people consuming a WFKD, which typically consists of a variety of nutrient-rich foods with some carbs (e.g., non-starchy vegetables, olives, nuts/seeds). Ketone levels may fluctuate throughout the day depending on factors such as food intake and exercise. For example, ketone concentrations may transiently double after exercise hitting levels as high as 3-5 mmol/L.

During total fasting when there is complete absence of any caloric intake for several days, the resulting increase in ketones is referred to as starvation ketosis. The absence of any dietary carbohydrate and protein over a week or more raises ketone concentrations to between 5 and 10 mmol/L, significantly higher than nutritional ketosis, but lower than concentrations in keto-acidosis. Starvation ketosis is an important physiologic process that evolved millions of years ago, enabling humans to survive for prolonged periods on body fat when food was not available.4 Obviously starvation ketosis is not sustainable long term, nor is it advisable to intentionally induce it for shorter periods (i.e., intermittent fasting) because of essential nutrient deprivation, lean tissue loss, and other potentially dangerous side effects.5

This is a distinct pathologic state that happens when insulin levels are extremely low, such as in a person with type 1 diabetes who cannot produce insulin. It is often called diabetic keto-acidosis or DKA. In this case ketone production redlines, resulting in dangerously high ketone concentrations that can exceed 20 mmol/L, an order of magnitude higher than typical values in nutritional ketosis. Except for type 1 diabetes or other conditions associated with insulin insufficiency (e.g., people with advanced type 2 diabetes who have lost most or all of their capacity for insulin production), a well-formulated ketogenic diet is associated with a built-in safety mechanism thanks to negative feedback inhibition that prevents ketones from exceeding 5 mmol/L.6

When maintained for several consecutive weeks, nutritional ketosis fundamentally changes the way cells work.7 This includes switching the mix of fuels they use, as well as awakening genes that are silenced by high-carb diets. Over time the body refines its metabolism to run on fat and ketones, ultimately manifested by two-fold higher rates of whole body fatty acid oxidation. Meanwhile glycolysis, insulin concentrations, constituitive inflammation, and oxidative stress are all decreased. As a result, keto-adaptation can have prompt and potent therapeutic effects; most notable reversal of clinical signs of metabolic syndrome and type-2 diabetes. Many other disorders/diseases may be amenable to keto-adaptation. This is an early-stage but burgeoning area of scientific investigation.

This term is often used synonymously with keto-adaptation, and commonly used to describe low-carb adapted athletes. If you are fat-adapted, it implies you have restricted carbs enough to induce an increase in fat burning. Fat-adapted athletes, and sedentary folks, can derive up to twice as much of their energy needs from fat, while decreasing their dependency on carbs.2,8 Whereas fat adaptation can occur to different degrees and across a spectrum dependent on the degree of carb restriction, keto-adaptation represents a more comprehensive reshaping of many physiologic systems. Keto-adaptation only happens when carbs are restricted to a point that induces sustained nutritional ketosis. The nuances here are subtle, but meaningful. For example, moderately restricting carbs (e.g., adaptation to a Paleo diet) may induce some degree of fat-adaptation and perceived benefits, but falls short of maximizing fat oxidation and producing positive health outcomes specifically linked to nutritional ketosis.9 A keto-adapted person is by definition fully fat-adapted, but a fat-adapted person may not be keto-adapted.

There are multiple companies marketing various forms of ketone supplements (usually different forms of βOHB), each touting theirs as better than the competition. Depending on the dose, they do work to rapidly elevate blood ketones. The result is a transient ‘acute ketosis’ that does not require a ketogenic diet or any carb and protein restriction. Supplemental ketones are absorbed from the gut and rapidly appear into the circulation usually peaking within an hour. This acute ketosis does not involve increased hepatic ketogenesis unless the product also contains medium chain fats. In fact, ketone supplements likely decreases endogenous ketone production.10 The level of ketosis varies depending on the form and the dose, but concentrations can easily reach the higher end of nutritional ketosis if very high doses are consumed or ketone supplements are ingested while in nutritional ketosis (i.e., in combination with a WFKD or fasting). The effect of ketone supplements is short-lived lasting a few hours, thereby requiring repeated dosing to achieve sustained high levels of ketosis.‍

Acute ketosis does not equate to keto-adaptation. Keto-adaptation is a process driven by the decrease in carbohydrate availability and hepatic ketogenesis. The increase in ketones is a response to, not the stimulus for keto-adaptation. This is not to say ketones don’t have important biologic effects, they most certainly do. But the upstream stimulus is the decrease in carbs, which results in nutritional ketosis and other parallel responses (e.g., enhanced fat oxidation). Thus, don’t expect to experience the full spectrum of benefits associated with keto-adaptation by simply consuming ketone supplements. Both approaches elevate circulating ketones, but without the carb restriction there is no net increase in hepatic ketone production, no decrease in insulin, and no net increase in fat oxidation. In other words, when ketone concentrations are elevated acutely from ketone supplements, but without decreasing carbohydrate intake, the only likely effects are those directly attributed to βOHB. That may include availability of an alternative fuel for the brain and certain signaling effects attributed to βOHB such as increased protection from oxidative stress and decreased inflammation. As of now, this is mostly speculation since we don’t have a lot of published science to evaluate how ketone supplements affect people.

The ability to achieve keto-adaptation is an elegant metabolic blue print hard-wired into our genetic code and our metabolism that sustains optimum fuel flow to all organs when dietary carbohydrates are limited and protein consumed in moderation. Emerging research indicates that keto-adaptation has transformative disease-fighting and performance-enhancing effects. Ketone supplements can produce acute ketosis in keto-naïve individuals or augment ketone concentrations in those who are keto-adapted. We don’t yet know under what conditions this is good, bad, or neutral. Scientific inquiry into the application of ketone supplements is underway, but for now there are more questions than answers. In short, nutritional ketosis and keto-adaptation are natural, if not preferred, metabolic states for humans. With proper education about a well-formulated ketogenic diet and ongoing support, most people can adapt their pattern of eating to induce sustained nutritional ketosis with significant perceived benefit.11