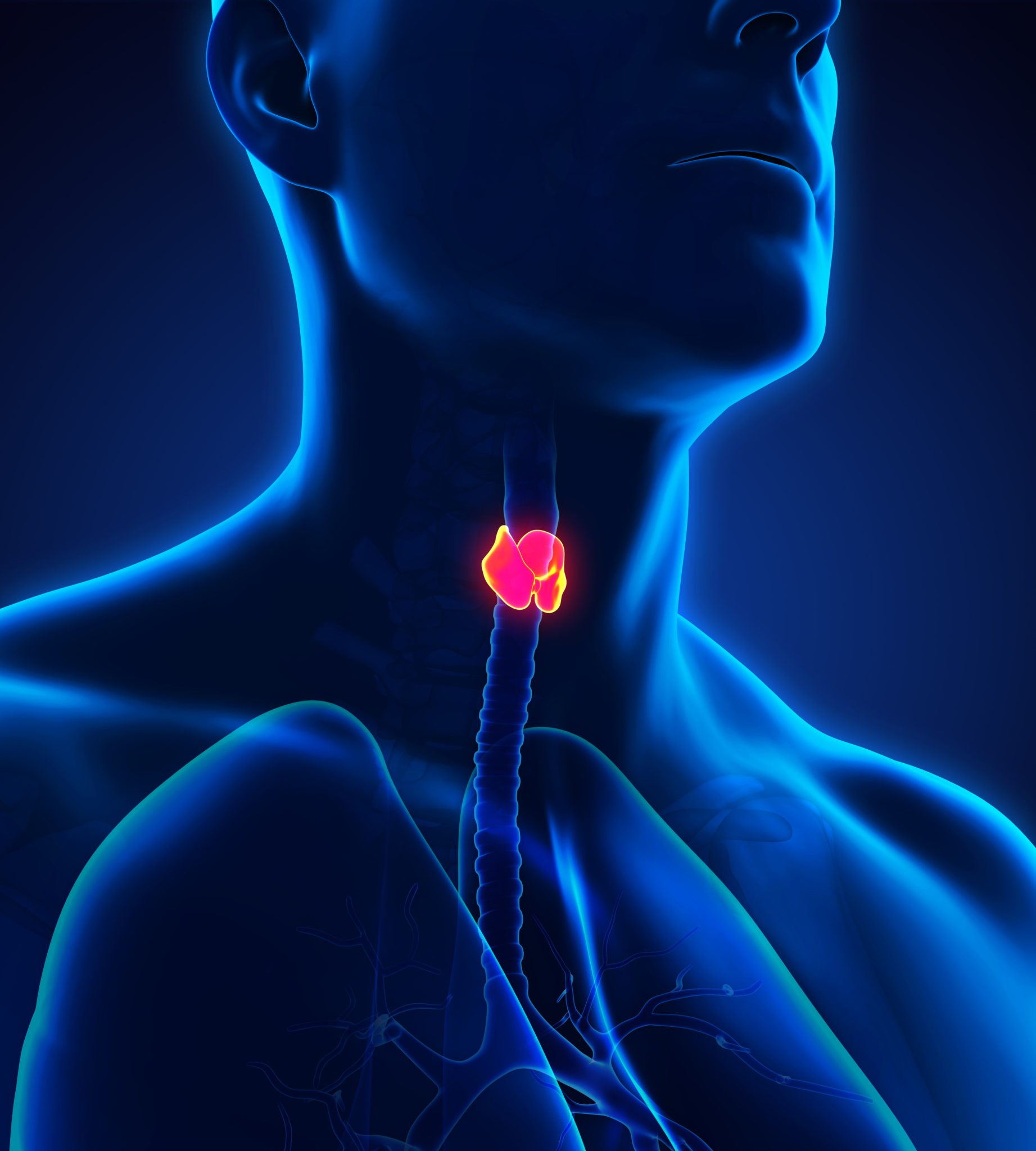 Does Your Thyroid Need Dietary Carbohydrates?

Thyroid hormones have an important role in regulating metabolic rate, and that’s why they have emerged front and center as a common concern associated with nutritional ketosis among some internet bloggers. There’s no question that when some people adopt a low-carbohydrate lifestyle, their thyroid hormone levels may change.

Several factors may contribute to the thyroid response. For example, eating fewer calories than you expend, causing weight loss, prompts the body to reduce thyroid function to slow its metabolism. That’s because the body interprets any form of energy restriction from any cause as a sign of famine, leading it to reduce metabolism by 5-15% to conserve energy stores. Second, even when energy is not restricted, a ketogenic diet is associated with sharply reduced blood levels of active thyroid hormone. In this case, even when energy is plentiful and body weight stable, either the low intake of carbs or the presence of ketones reduces circulating concentrations of active thyroid hormone.

To the casual observer, this reduction in active thyroid hormone (called T3) has been taken as evidence that carbohydrate restriction impairs thyroid function. Some have opined that carb restriction should never be maintained below 100 grams per day in order to prevent this effect. Others advocate that people on a low-carbohydrate, high fat (LCHF) diet take intermittent “holidays” from carb restriction to boost thyroid function back up to “normal.”

An alternative explanation for these changes in thyroid hormones when one is weight stable on a LCHF diet is that the body becomes more responsive to these hormones due to beneficial changes in cell structure and function when in nutritional ketosis. As a result, it can function normally at lower T3 levels. Put another way, a ketogenic diet seems to result in improved thyroid hormone sensitivity (i.e., it takes less hormone to produce the same effect), which, if anything, puts less of a burden on thyroid hormone (T4) production in the thyroid gland and its conversion to T3 in the liver.

Is this hypothesis of improved thyroid hormone sensitivity on a ketogenic diet far-fetched? In fact, it has been repeatedly demonstrated that a well formulated ketogenic diet improves insulin sensitivity, often dramatically so in people with insulin resistance or type 2 diabetes. There is also strong evidence that the brain’s sensitivity to the satiety hormone leptin is improved during nutritional ketosis as well. Thus an improved thyroid hormone response during a LCHF diet would be quite consistent with these other documented improvements in hormone sensitivity.

How many published studies from well designed, prospective human trials have shown that impaired thyroid function (i.e., hypothyroidism) occurs on a ketogenic diet? The answer to this question is quick and simple—NONE!

This fact notwithstanding, it is common to find recommendations on the internet for daily carb intakes at or above 100 grams per day to maintain “normal thyroid function.” Since 100 grams per day of even low-glycemic carbohydrates will completely suppress nutritional ketosis in most adults, this “remedy” will definitely increase blood thyroid hormone levels. But here’s the key question: are these higher thyroid hormone levels really normal, or is this a relatively hyperthyroid state (compared to nutritional ketosis) driven by excess dietary carbohydrates? What if the lower T3 levels associated with a well formulated ketogenic diet are indicative of optimum T3 sensitivity and thus the true physiologic norm for humans?

The other proposed “cure” for this “problem” is to intermittently eat lots of carbs. Be this a few days per week or one week per month, the result is a metabolic roller coaster ride that is not without consequences. We have established that it takes many weeks to fully adapt to the state of nutritional ketosis, but most of this adaptation is reversed with just a few days of eating 100 grams or more per day of carbohydrates. What sense does it make to be constantly coaxing the body to keto-adapt and then jerking it back to deal with the disposal of high carbohydrate loads? Given that blood beta-hydroxybutyrate levels characteristic of nutritional ketosis reduce oxidative stress and inflammation, why would you want to shut down this beneficial effect even part of the time?

If carbohydrate-restricted diets were having a negative effect on thyroid function, it would be predicted that a disproportionate number of people would develop clinically obvious cases of thyroid failure (hypothyroidism) while following a ketogenic diet. Indeed, it could be that there is some percentage of particularly vulnerable people who respond to a low-carbohydrate diet in this way. How could we tell if this were happening? Well, there have been a number of large randomized studies published in the last decade lasting three months or longer using low-carbohydrate or ketogenic diets. Let’s look and see how many new cases of low-carb-induced hypothyroidism were reported in these studies.

‍While these studies were not purposefully designed to look for thyroid dysfunction, overt hypothyroidism is hard to miss. These studies were all run by (or involved monitoring by) top-notch physicians, so a new case of hypothyroidism would definitely have been reported as a “serious adverse event” associated with the LCHF diet. And yet, out of 350 closely monitored patients, there were none!

Tens (if not many hundreds) of thousands of people in the United States—not to mention the developed world—make a serious effort to adapt to a low-carbohydrate diet each year. For many of them, they choose this “radical” diet only after conventional diets haven’t worked. In this context, it is likely that quite a few individuals with early thyroid issues (e.g., latent Hashimoto’s thyroiditis) try low-carbohydrate in response to their early and subtle symptoms, only to develop obvious symptoms of their slow-onset hypothyroidism months or years later. So if there actually is an increased incidence of diagnosed hypothyroidism after starting a LCHF diet, this could explain an association that has nothing to do with causality. But given this analysis of the published data to date, there is little if any likelihood that a well formulated ketogenic diet causes significant thyroid dysfunction.

‍Along with his early mentors and collaborators, Dr. Phinney was involved in three studies of ketogenic diets in which they measured one or more parameters of thyroid hormone response. The first study involved six subjects on a very low-calorie ketogenic diet (VLCKD) for six weeks, the second evaluated nine men given a weight-maintenance ketogenic diet for 4 weeks, and the third studied 12 adults given a VLCKD with or without exercise training for 4-5 weeks.

In addition, in 2005 Yancy et al. published a study (Nutr & Metab) of 28 diabetics given a LCHF diet for four months, during which their mean TSH values did not change significantly (1.6 to 1.4 uU/L).

So let’s query these data from three perspectives: 1) failure of the thyroid to make enough T4, 2) failure of the liver to turn enough T4 into T3, and 3) markedly improved T3 sensitivity. Starting with the latest data from Yancy et al. first, if either the thyroid gland or the liver were failing to maintain adequate thyroid hormone effect, TSH should increase. It does not, but this was only measured in one study. Second, if the liver is failing to make enough T3, then TSH and T4 values should rise. In both our 1980 and 1988 reports, T4 went down slightly. And third, in all three studies blood T3 levels went down sharply (from a mean of 151 to 92) but clinical signs and symptoms were not indicative of overt hypothyroidism.

Case in point: although unpublished, Dr. Volek ran some thyroid tests on 14 overweight/obese men whose other results were reported in a 2004 study. Eight of these men consumed a reduced energy ketogenic diet for six weeks and then switched to a low-fat diet for another six weeks. Six other men consumed the low-fat diet first and then switched to a ketogenic diet. Average free T3 concentrations in the 14 individuals were significantly lower after the ketogenic plan than the low-fat diet (3.5 vs 4.2 pmol/L). Regardless of diet order, free T3 concentrations were lower during the ketogenic diet in 13 out of 14 men (see figure). However, despite the lower free T3 levels, the measured resting metabolic rates of these subjects were not different between diets.

And finally, although it was a relatively short 11-day study, Bisschop et al. fed six men weight-maintaining diets containing 85%, 44%, and 2% of energy as carbohydrates. As shown in the figure below, although TSH and REE did not decline, serum T3 values plummeted (heavy black bars in the figure). These results again show a disconnect between circulating T3 and REE in the context of a ketogenic diet.

The only viable interpretation of these data is that ketogenic diets markedly increase tissue sensitivity to T3, and thus serum T3 levels decline while the physiological response to T3 remains normal. In this scenario, both the thyroid and the liver have to do far less “work” to maintain a normal thyroid physiologic response. Taking this one step further, why would anyone want to force their thyroid or liver to greater levels of thyroid hormone production by eating lots more carbohydrates? Forcing the pancreas to make more insulin by eating more carbs clearly doesn’t do a lot of good for type 2 diabetics, and we think the same logic applies here for thyroid function.

It’s understandable why some people may be concerned or misled by the changes in thyroid hormones that occur when one adopts a LCHF lifestyle. Clearly there is a need for one or more large prospective studies to shed additional light on this issue. But given the past attitude of the NIH towards low-carbohydrate research, don’t hold your breath. In the meantime, don’t be pressured into eating more carbs than you really need on the mistaken assumption that they are required to maintain normal function of your thyroid gland.

‍Have more questions about nutritional ketosis? Check out our FAQ by Dr. Steve Phinney and the Virta team.